A discectomy is a surgical procedure performed to remove a fragment of the herniated disc that is causing pressure on a nerve root or the spinal cord. Herniated disc is a condition affecting the spine in which the inner central portion (nucleus pulposus) of the spinal disc is forced out through a tear in the outer, fibrous ring (annulus fibrosus) of an intervertebral disc. Herniated disc is also known as a bulging disc, ruptured disc or slipped disc.

Cervical discectomy is a surgical procedure which relieves compression on the nerve roots and/or the spinal cord because of a herniated disc or a bone spur in the cervical (neck) region. This procedure involves making an incision on the front side of the neck (anterior cervical spine), followed by the removal of disc material and/or a portion of the bone around the nerve roots and/or spinal cord to relieve the compression on neural structures and provide them with an additional space. 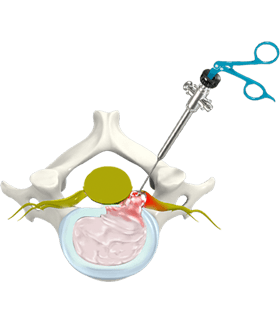 Cervical discectomy is also referred to as decompressive spinal procedure as the surgeon removes compression on nerve roots by removing the total or a part of the disc and/or bony material that is causing pain.

Thoracic discectomy is a surgical removal or excision of all or part of an intervertebral disc of the thoracic spine. This technique is used to treat a herniated disc in the thoracic spine that is causing pain and nerve irritation or injury.

The procedure is also done to stop the motion across a portion of the spine and create a solid structure. An incision is made on the side of the ribcage and the herniated disc fragment is removed. After the procedure, a drainage tube is left in place around the lung which is then removed after 1-2 days. This technique results in faster recovery but pain or soreness in the chest area may occur which resolves after few days.

Lumbar discectomy is a spinal surgery that involves removal of damaged intervertebral disc to relieve pressure on the spinal nerves (decompression) in the lumbar (lower back) region. The lumbar region forms the lower portion of the spine and comprises of five vertebrae (L1-L5).

Lumbar discectomy is indicated in cases of severe nerve root compression due to a ruptured disc. Symptoms of nerve impingement include back pain or radiating pain into the hips, buttocks or legs, numbness or tingling sensation and muscle weakness in the back and lower extremities.